We had many firsts this year at the ranch; our native turkeys were mature enough to start hunting, we had our first number one pending SCI hunt, and of course, we had the amazing opportunity to host a donation hunt. So let’s break down this year hunt by hunt; here is your 2020 hunting season wrap up for Austin, Texas! In April we hosted our first Austin, Texas Native Turkey Hunt here on the ranch with our hunter of the weekend Keith York. He even took live footage of the bird in the few days of tracking he spent here before his actual hunt! We have that posted on our Igtv through Instagram, you can check that out by clicking here. Shortly after Keith scored his Turkey, Leo, our ranch manager and hunting guide enjoyed hunting his birthday bird for the year! This rifle hunt was extra special for us since we were able to share it with him. We are so glad that the turkeys that were on this property when we first moved here have continued to thrive, and many more will be available to hunt next hunting season! In July we buckled down and finished prepping for this 2020 Hunting season. We installed professional meat freezers. Our local taxidermist and meat processor can come and pick up for our hunter’s trophies directly. Going along with our final hunting season prep, we opened up the Austin Executive Condo and Lodge to VRBO guests, and to finalize that we had the great pleasure of hosting Austin 360 Photography, who kindly came out and filmed a 360-degree tour of the buildings, and took some great photos for us to show our five-star amenities. You can check out that tour by visiting our VRBO Page or by checking it out on our Virtual Tour Page. In August we were featured on Guns.com in their article on Hunting Exotics it was lovely to have them down and truly a great experience to see what was new and up-and-coming in the world of firearms. Then our favorite months of the year came – Whitetail hunting season in Austin, Texas! Justin Iselt came in October and scored the first pending #1 typical SCI World Record with his crossbow. Our Pending #8 SCI scored by Mark and Bev Nuessle this season here in October. This massive non-typical scored 319! It was lovely to have them this hunting season. It is always great to have couples stay at the ranch. Our Archery SCI #10 snagged by Rene Barrientos, a truly impressive hunt with a traditional hunting weapon. This non-typical whitetail hunt was a blast from start to finish with Rene. It isn’t every day that we have an archery hunt. We love to have these hunters down on the ranch!

One of our favorite hunts of our years here hosting hunts in Austin, Texas. The Forde’s flew in from California in November and spent a spectacular hunting week here with their daughter, Allie. Going home with not one, not two, but FOUR SCI World Record hunts. Let’s go one by one on these great trophies: Allie hunted her Turkey (all by herself!) with her bow, look at this impressive youth hunt score! This turkey was almost the size of her! We can’t wait to see what she is able to score next time she hunts with us. Teran Forde tracked this massive pending #6 SCI Axis deer with Allie for over 400 yards. After shooting it from 43 yards with her center point 100-grain muzzy broadhead crossbow. 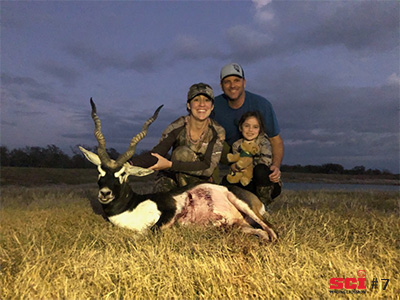 Steve and Teran scored another SCI ranking Exotic hunt, their #7 Blackbuck! Exotic hunts are open all year round here at the ranch. These beautiful blackbucks are a truly spectacular animal to have as part of your game room! 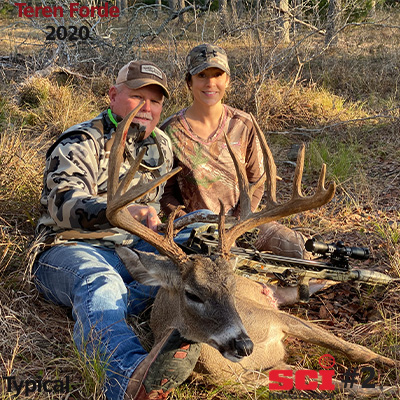 Teran scored the #2 SCI Typical Whitetail with her crossbow while she was on her first day here! Such an impressive hunt and animal for Teran this 2020 hunting season. It was an honor to have the SCI #1 and #2 be scored at the ranch in Austin! 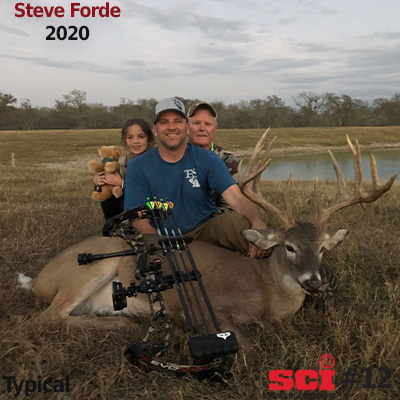 Steve didn’t leave without an SCI Typical Whitetail Trophy either! Scoring this #12 Crossbow pending record just before they left! This family had one of the most impressive hunting trips we have ever seen at the ranch. The #15 SCI Typical Whitetail was taken by Tyson Roberts this month as well. He came in from Saint Croix for his short three day hunting weekend! 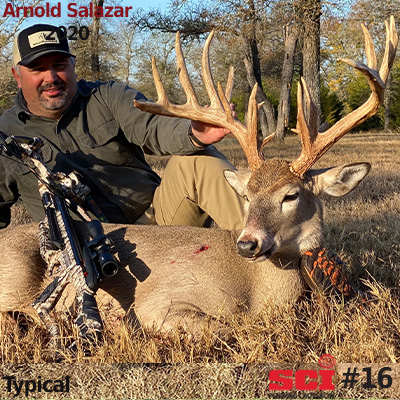 Arnold Salazar came in hot and scored the #16 record for the year the weekend after that! So many SCI records scored on the ranch in 2020, and next year we have many more in store!

Our last hunting guests of the year came in just this past weekend, Jayden Oakes and his family. It’s not every year that we are given the opportunity to host a hunter who deserves the world, but this crazy year of 2020 gave us just that. Jayden is an amazing kid battling pediatric colon cancer. We are so thankful to have been able to donate a hunt to him and show him everything Texas hunting has to offer. He scored his trophy and we wanted to share a few photos from his stellar trip here! Jayden, Happy Hunting! Next Season at Austin Trophy Whitetails:

All of these amazing, once in a lifetime hunts, all in our 2020 hunting season! It has been a truly great year for us here at Austin Trophy Whitetails, which is plain to see and next year is shaping up to be tenfold of the year we had in 2020. We are set to become the record-holder for the most amount of SCI’s record hunts by next season. Next year, we should be able to host more Turkey, Axis, and Blackbuck hunts than we ever have before, and begin opening hunts for our Sables. With us, it is never too early or late to book your Trophy Hunt. Want to end your year with a trophy exotic hunt? Do you want to secure your spot for next season in advance to ensure the first choice of our massive Whitetail Bucks? We look forward to hosting you!